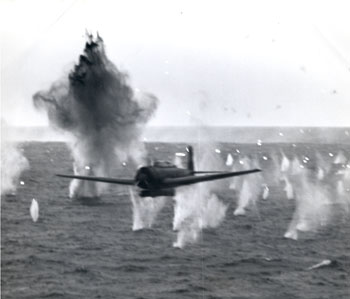 The Japanese Kamikaze was their last desperate attempt to counter American military and industrial superiority.

Japan’s Kamikaze pilots and their suicide attacks on the American warships in the last year of World War II, was one of the most terrorizing memories of the war. Kamikaze, which means "Divine Wind" in Japanese, was Japan's last attempt to balance the ever increasing technological and material advantage of the American forces advancing to Japan. The Kamikaze attack tactic was suggested on October 19, 1944, by vice-Admiral Onishi of the Japanese Navy, when he was assigned to command the air attacks against the huge American invasion fleet off the Philippines, and then realized that he had less than 100 operational aircraft for this task. There was no way to sink or even severely damage the American fleet in any conventional tactic, so the Admiral needed a force multiplier, a way to get a significantly greater striking power from a given force.

The use of Guided weapons provided a much greater accuracy and lethality than Japan’s unguided weapons, thus producing a much greater damage per weapon unit and per attack on enemy. These weapons already existed in other countries and had been operational for over a year, but not in Japan. The German Air Force successfully used large radio-guided bombs against battleships and cruisers since September 1943, but Japan had no such weapon, and therefore Admiral Onishi suggested that volunteer pilots will guide their bomb-carrying aircraft all the way to an explosive suicide collision with their American warship targets, acting as a living guidance system, literally becoming "smart bombs".

The Japanese had adopted this tactic immediately. A large number of pilots initially qualified and experienced pilots and later air cadets with minimal training who were asked to volunteer, became Kamikaze pilots. The kamikaze pilots’ motto was “One man-one ship”.

In order to increase the Japanese Kamikaze pilots chance of a successful penetration of the American Navy's dense perimeter defense of fighters and anti-aircraft ships, and reach the main ships in the center, most desirably the aircraft carriers. Evidence shows that the Japanese concentrated most of the Kamikaze pilots attacks during the battle of Okinawa in ten large attack waves of mixed Kamikaze and conventional attack aircraft, in an attempt to saturate the American defenses. These large attack waves, were also coordinated with the Japanese naval and ground operations of the battle of Okinawa, this battle was said to be the wars last great battle.

In the first of these Kamikaze attack waves, 355 Kamikaze pilots attacked the American fleet off Okinawa, together with 341 conventional attack aircraft, and in coordination with a naval attack which included the super-battleship Yamato. The result of this massive air strike was six sunken ships and ten severely damaged.

When Japan ran out of ordinary combat aircraft for Kamikaze attacks, slow trainer aircraft were also used. Another aircraft used was the Okha (cherry blossom), Japan's latest new weapon. The Okha was specifically designed as a Kamikaze missile. It was a small rocket-powered aircraft with a large 1200kg warhead in the nose, which was carried by a bomber and dropped 20-30 miles from its target, where its Kamikaze pilot ignited the rockets and streaked to its target. In its final dive, the Okha reached a top speed of 576mph, much faster than any other aircraft, but most Okhas were shot down by American fighters before even being dropped from the carrying bombers.

There was a total of about five thousand kamikaze pilots were launched, mostly in the Battle of Okinawa, this consumed most of the remaining human and material resources of Japans air power. The result of their effort was thirty-six sunk American ships and landing craft, and 368 damaged. The ferocity of watching wave after wave of Kamikaze pilots hurtling down through a dense hail of anti-aircraft fire, and the enormous fiery explosions which followed, terrorized the Americans, but the Kamikaze campaign failed to achieve its strategic goal of stopping the American advance, and American air attacks were launched against the Kamikaze air bases in southern Japan in order to reduce their numbers. Japan lost its last battle despite the enormous sacrifice of its fanatic warriors, and lost the war.

Other Kamikaze units and weapons

The Japanese desperate hope that suicide warfare is the way to avoid defeat, led the Japanese army and Navy to adopt other suicide warfare tactics and weapons. In military terms, the idea was similar in most cases, to use a human to precisely guide a powerful explosive weapon all the way to the target, in order to achieve a lethal direct hit, and by doing so convert a simple weapon to a guided "smart bomb". The Japanese used the following other suicide weapons and tactics, all with lesser success than Kamikaze aircraft:

They used explosive speed boats - a Japanese adoption of the original Italian explosive speed boat. While the Italian naval commandos used explosive speed boats equipped with special eject seats, the Japanese used them as a suicide weapon. Thousands were produced but most were kept for the expected invasion of Japan. They sank eight American ships. This weapon was used several times after World War 2, both with eject seats and as a suicide weapon. The last recorded use was when on October 12, 2000, Al-Qaeda suicide terrorists used it to attack and severely damage the American destroyer USS Cole in Aden, Yemen.

Suicide torpedoes - this weapon actually preceded the Kamikaze aircraft. Called "Kaiten", these were enlarged torpedoes, fitted with a tiny cockpit and periscope for a suicide operator, and with additional fuel and oxygen and an enormous 3400lb warhead, and launched from a specially modified submarine or a ship. Hundreds were produced, but they sank just two American ships.

Suicide midget submarines - with a very high loss rate in their original non-suicide use, a suicide model was developed, carrying explosives instead of attached torpedoes.

They also used suicide infantrymen carrying anti-tank mines - the Japanese army's suicide weapon. Their goal and motto was "One man - one tank".

In response to the American landing in Okinawa, which was expected to be the last step before an invasion of Japan proper, the desperate Japanese High Command ordered on April 6, 1945, that suicide warfare tactics should be employed by ALL branches and units of the Japanese armed forces. The next day, following this command, the Japanese super-battleship Yamato, the largest battleship ever built and armed with the largest guns ever, was sent to a one-way suicide mission in Okinawa. Its purpose was not just to destroy as many American ships as possible, but to also deliberately run aground in Okinawa so that it would be impossible to sink it, so it will be able to continue to fight until literally destroyed. The plan failed when the mighty Yamato was spotted, and then sank by a massive air attack, before reaching Okinawa.

Another suicide tactic used in this spirit was of fighter aircraft ramming American heavy bombers instead of firing at them.

History shows that all those who systematically and repeatedly used suicide warfare lost their war, and the explanation of that is simple. They used it because they were significantly weaker than their enemies, technologically, economically, and therefore eventually militarily, or otherwise they would not have to fight like that.

Retrieved from "https://witp-ae.fandom.com/wiki/Kamikaze_Missions?oldid=4012"
Community content is available under CC-BY-SA unless otherwise noted.